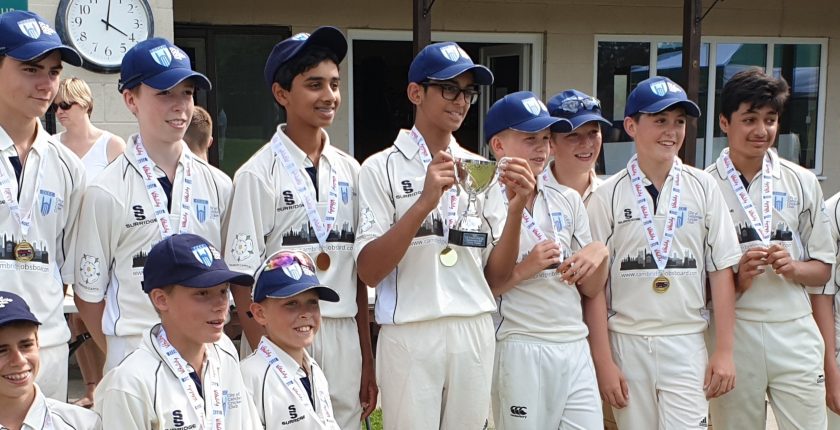 A glorious afternoon in Burwell saw CCCC beat a spirited if a little injured SWCC team to the CYC U13 Cup.

Having lost the toss, CCCC was invited to have a bat with Sebastian Harrison and Yousuf Chowdry given the honors of opening. With a little luck (Seb was dropped three times!) they blunted the attack and laid a decent opening foundation before both falling in quick succession. The middle-order then tucked into the 2nd line bowlers with delight. Ed McLean and Hugh Aubrey, in particular, pushed the run rate up rapidly. The scoring was ably assisted by extras (although City were just as bad if not worse later on) and the fact that Max Wiseman for SWCC was clearly injured and fielding on one leg (as these things do, the ball began to follow him!) although he took a solid catch when it was pumped down his throat by Ollie Harris.

Pick of the bowlers were Noah Vintiner and Sam Grant. One hundred and Seventy Four seemed a long way off for SWCC.

However, they were gifted a springboard start by CCCC with some truly horrid bowling in the first 8 or so overs! It wasn’t until Noah Vintiner, and Hywel Bowen both had to retire not out that the game slipped away from SWCC. Yousef Chowdry then nipped out a couple of wickets, and the batsmen just couldn’t get Hugh Aubrey away. The teams shook hands after 18.5 overs as it was decided not to further injure any of the SWCC players.

City were worthy winners but will have to step up their bowling against sterner tests to come as they now progress to the regional competition.